HAVE YOU BEEN HEARING ABOUT THE GOODNESS OF APPLE CIDER VINEGAR?

Apple Cider Vinegar (ACV) is a highly versatile and nutritious ingredient that we always recommend using in the form of ORGANIC and RAW. This basically means that the vinegar is unfiltered and unpasteurised, and retains all of the naturally

occurring goodness including the "mother". The mother is a cloudy, cobweb-like formation you can notice floating around in the liquid, which is made up of living nutrients and beneficial bacteria. Common/regular Apple Cider Vinegars have destroyed all of this goodness is using heat for filtering and pasteurisation...what a waste!

Aside from its remarkable history, we cannot get past the amazing health benefits. We talked to Cassandra Law, Nutritionist (BHSc) of Green Brick Road Heath who gave us her 5 top reasons to use Organic Apple Cider Vinegar:

ACV contains acetic acid, which has been shown to aid in the reduction of the glycemic index of foods. The acetic acid slows down the rate in which sugars are released into the bloodstream and therefore, minimises appetite.

Cleopatra is said to have used ACV to clean her skin as it was thought back in the Egyptian era to have been the key element to flawless skin. The belief for her beautiful skin is due to ACV’s high acidic levels, this can balance skin PH when applied externally as well as having various antiseptic and anti-fungal properties. (It’s said to be effective on warts & acne!)

The ACV aids in the breakdown of mucus within the body whilst cleansing the lymph nodes (these nodes work as filters) therefore enhancing the elimination of harmful bacteria or microbes. The ACV may also reduce allergies due to the ability to decrease the build-up of mucus, preventing sinus congestion as well as associated symptoms of sore throats and headaches.

The enzymes and potassium that are found in ACV can help banish fatigue and give you that extra oomph you need to get through the day. ACV also contains various amino acids that may help prevent the build-up of lactic acid in your body thereby furthermore preventing fatigue.

Last but not least is the reason why I choose to drink ACV every morning before breakfast. ACV aids in reducing symptoms that are commonly associated in people with stomach issues such as reflux, bloating and indigestion. ACV (taken before a meal) allows the stomach juices to gear into action by triggering enzymes to prepare the stomach for the breakdown of food.

It is best to dilute Apple Cider Vinegar due to its high acidity. Simply mix two tablespoons of Organic Raw ACV with warm water and raw honey, or a fresh juice. It is also a fantastic ingredient for using in salad dressings, sauces, chutneys and marinades. 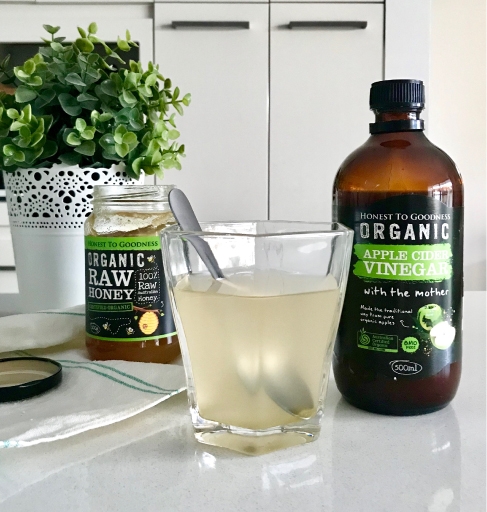 BUY ONLINE: Organic Apple Cider Vinegar with the 'Mother' 500ml  or you can grab it in Bulk 5 Litres!

For many years we’ve been told to avoid or significantly limit our fat intake, with all fats c …
read more >>
This 7 day meal plan features winter warming recipes which are packed full of seasonal produce …
read more >>
Confused about the different types of flour? Wheat, wholewheat, gluten free…when it comes to baki …
read more >>