Berringa Super Manuka honeys are sourced from the native Australian Leptospermum Polygalifolium bush, with amazing antibacterial and antimicrobial properties. The honey is harvested and bottled in Australia, and is certified organic.

Independent research conducted by the Queensland Government has shown that the Berringa Super Manukas have the most powerful antibacterial properties of any honey in the world!The antibacterial strength of Super Manuka MGO 500 and over was shown to be effective in preventing the growth of antibiotic resistant staphylococcus aureus and e-coli, common bacterial infections in hospitals and nursing homes.

Fact
25% of the population carry one to two of the staph strains at any one time, and nature has provided us with a natural alternative!

Chief researcher working on the project, QAAFI scientist Dr Yasmina Sultanbawa, said the potency of the honeys meant that only a small amount was required to fight infection. 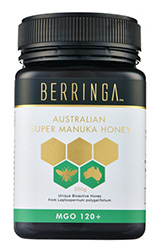 Therapeutic Use
Use the Super Manuka 120+ up to 3 times a day to prevent mild coughs, colds & flu's. Mix 1 tsp honey with a squeeze of lemon in hot water for a warming and healing drink during winter.

Did You Know?
Honey facilitates an increase in immune fighting cells which aid the healing process (Molan 2001a).

Read more about Berringa Honey on our Grower’s & Suppliers page

For many years we’ve been told to avoid or significantly limit our fat intake, with all fats c …
read more >>
This 7 day meal plan features winter warming recipes which are packed full of seasonal produce …
read more >>
Confused about the different types of flour? Wheat, wholewheat, gluten free…when it comes to baki …
read more >>