A Chia Pudding makes an easy breakfast, quick snack or after-dinner dessert. The basics of a Chia Pudding are simply chia seeds and milk. Organic chia seeds are packed full of omega 3 and plant-based protein, giving you plenty of fuel for the day and satisfying your hunger.

Heres how to make a basic Chia Pudding: 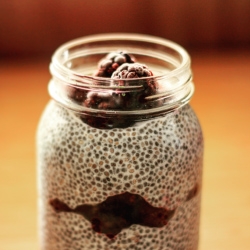 Did you know: the secret to a perfect chia pudding is actually in the milk!

So which is the best milk to use? We decided to put it to a test. We experimented with 4 different kinds of milk to see which one made the creamiest and delicious chia pudding.

Most of Team Goodness predicted Organic Dairy Milk to come out on top, due to its naturally high fat and protein content.

We took 4 identical jars and placed 1 tablespoon of Organic Chia Seeds in each. We pour 5 tablespoons of milk into each jar and shook them up to combine. They were then left in the fridge overnight to work their magic. 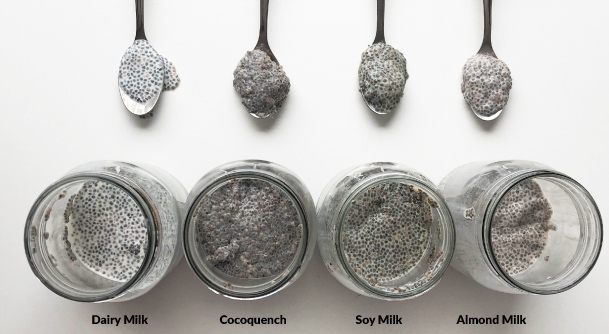 After a hard deliberation, weighing up the pros and cons, Team Goodness has decided that we would choose ORGANIC ALMOND MILK as the best milk for a chia pudding! It was not too thick and not too runny with a delicious creamy texture. 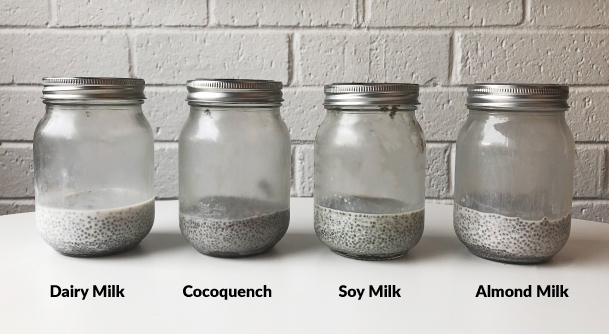 Of course preferences and dietary requirements may mean you have to choose a certain milk for your pudding. If you are using coconut milk, add a bit more to create less jelly and more pudding or try our Organic Coconut Milk as it is naturally creamier! If using dairy milk, add a bit less and skip the skim option – full cream is best. You could even try combining milks to get the best of both worlds!

Which milk do you prefer for your chia puddings? Let us know in the comments below >>